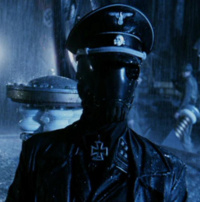 It's November, folks, so it's time once again to wish our beloved 'Return to Castle Wolfenstein' a very happy birthday!

'RtCW' was developed by ID Software, published by Activision and was released to the North American market on November 19th, 2001.

With many mods and maps still being created for this classic World War 2 'FPS' it shows just how popular the game remains to this day. Long may this continue

I'm late to the Happy Birthday celebration, but I'm still happy that this game still has a community!